Looking for an affordable action camera to use for filming hunts? If so, then the Campark V40 may be the perfect option for you.

I was recently approached by a representative from Campark, makers of various trail cameras, action cameras and other electronic devices, about reviewing some of their products on the Georgia Afield website. I love free products as much as the next guy, but told them that I’d only do the review if I could be 100% honest about it, highlighting both the good and the bad. They were fine with that and said they expected an honest review, so they sent me their Campark V40 4K/30FPS Action Camera to try out.

For those of you who don’t care to wade through all the specs and details of the V40, I’ll get straight to the point. So far (I’ve only had the camera a couple of weeks), I am very impressed with this action camera and would definitely recommend it for someone looking for an affordable alternative to a GoPro. It seems to be well built, is simple to operate and navigate through the menu system, and takes excellent video. The unit retails for $159. but as of this writing (January 2022), it is available directly from Campark for $109. I believe you can probably find it online for less than $100. I’ve had another action camera for over a year that I paid around $60 for, and while I’ve been pretty happy with it for the price, I would definitely spend the extra $40 for the V40 if I needed to add another action camera to my setup.

Now, for those of you who do enjoy a little deeper dive into the specs and features, let’s take a look at the good and bad of the Campark V40 4K/30FPS Action Camera. 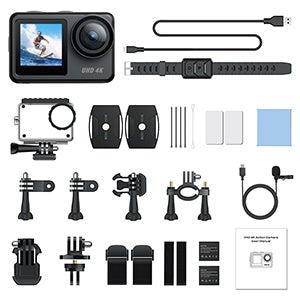 The first thing I noticed when I opened the box and got the V40 in hand was how substantial it felt compared to my other action camera. It had some weight to it and felt like it was well built. It has a rubber grip around the outside of the camera frame that makes it easy to handle and also serves to protect the buttons and electronics from water and moisture, since the camera itself is waterproof to 10 meters (33 feet) even without the included waterproof case. When you put it in the included case, it can then be used in water up to a depth of 40 meters (133 feet). The doors to the battery compartment and USB/HDMI ports are sturdy and stiff to open, which is necessary to ensure a waterproof seal. I did find it a little odd that the micro SD card slot is right next to the battery, which makes it a little difficult to pull the card out with the battery installed, but that’s very minor in the grand scheme of things. Unlike my other action camera, the V40 includes a built in threaded port on the bottom to easily mount it to a tripod, selfie stick or other type of mounting device.

Several things attracted me to the V40 when I was told I could pick a Campark product to review — the 4K resolution, which will allow me to “zoom in” in post-production without losing HD quality, and the dual screens on the camera. I use my other action cam for a second-angle camera when recording hunts, typically pointed at myself to capture me taking a shot. But since the only screen on that camera is on the back, I can’t tell what I’m actually recording without using the app on my phone, which is a pain. However, with the V40, I can turn on the front screen and see exactly what I’m recording with the camera pointed towards me. This feature also makes the camera useful for vlogging.

Another major benefit to this camera over my other one was the ability to add an external microphone. Not only can you add an external mic, but Campark includes one in the kit. It’s a lapel style mic, but I clipped it on the camera and recorded some video of me talking, and it seems to do an excellent job capturing audio; much better than the built-in microphone on my other action cam.

Another feature that really made the V40 a great addition to my video setup is the fact that it is waterproof even without the included case. That means if a rain shower pops up during a hunt, or if the camera takes a tumble into a puddle, you can wipe it off and keep recording.

The last thing I want to mention when it comes to excellent features of the V40 is its user-friendly touch-screen menu. I found the menu very intuitive and easy to navigate. Everything is labeled well and in a way that makes it easy to determine exactly what you are changing about the camera. The touchscreen has performed flawlessly so far, as well.

I know at this point it sounds like I’m just writing a fluff piece for the V40, but I really haven’t found much to complain about to-date. As I mentioned above, the micro-SD card slot is in an odd place, but that’s a really minor inconvenience. I did notice in standard mode that the camera didn’t seem to perform well in low light, which could definitely be problematic when filming deer hunts. However, I found an “Auto Low Light” setting on the camera that seems to rectify the issue. However, I haven’t reviewed any footage shot using that setting yet to see how much it impacts the quality of the video.

Since I’ve only had the camera for a couple weeks at this point, with limited use, there are obviously some things I just don’t know at this point, or problems that could certainly arise in the future. One question I still haven’t answered for myself yet is how well the batteries are going to last in normal use. They seem to do well from my limited experience, and having an included backup makes it nice. If that’s a major concern for you, you could always pack a portable cell phone charger and plug it in to the action cam as a power source. I’ve done this with my other camera and it works great.

I will finish up by saying that at this point I have no way of knowing how the camera will hold up to the abuse of using it in hunting situations, but I will plan an update to this review after turkey season to let you know if I’m still just as impressed.